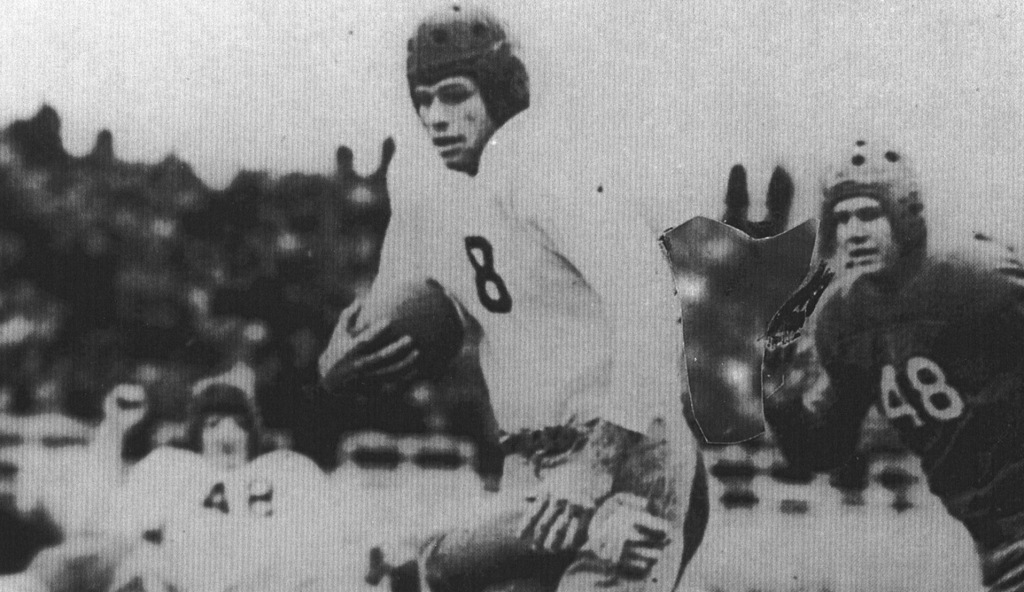 Robert David “Davey” O’Brien was born in Dallas, Texas, on June 22, 1917. As a youth, he quarterbacked a sandlot football team self-named the Gaston Avenue Bulldogs and spent several summers at the Kanakuk Boys Kamp near Branson, Mo. He was a 118-pound, 5-foot-7 all-state selection who led Woodrow Wilson High School to the Texas State playoffs in 1932.

O’Brien enrolled at Texas Christian University in 1935 and played behind the legendary Sammy Baugh. In 1937, O’Brien’s first season as starting quarterback, TCU posted a 4-4-2 record, yet O’Brien began to make a name for himself as he was named to the first-team All-Southwest Conference.

In 1938, the now 150-pound O’Brien, often referred to as “Little Davey,” threw for 1,457 passing yards – a Southwest Conference record that stood for 10 years. He had only four interceptions in 194 passing attempts, and set a NCAA record for most rushing and passing plays in a single season. That year O’Brien led the Horned Frogs to their first undefeated season, as they outscored their opponents by a 269-60 margin and held nine of their 10 regular-season opponents to seven points or less, including three shutouts. With O’Brien at the helm of their offense, the Horned Frogs’ season culminated with a National Championship title following a 15-7 victory over Carnegie Tech in the Sugar Bowl.

O’Brien amassed remarkable accolades as a college athlete – named to 13 All-America teams and the first player to win the Heisman, Maxwell and Walter Camp trophies in the same year – but even more impressive was the leadership he exerted, the competitive spirit and sportsmanship he displayed, his dedication to excellence and his ability to inspire others to excel. O’Brien was also the first Heisman winner from both TCU as well as the Southwest Conference, and when he went to New York to accept the Heisman Trophy, Fort Worth boosters hired a stagecoach to carry him to the Downtown Athletic Club.

After graduating from TCU, O’Brien signed a $10,000 contract with the Philadelphia Eagles of the National Football League (NFL). In his rookie season with the Eagles, he passed for 1,324 yards in 11 games, breaking fellow TCU alum, Baugh’s, NFL record and was named first-team quarterback on the NFL’s All-Star Team. The Eagles gave him a $2,000 raise, but he retired after the 1940 season to join the Federal Bureau of Investigation (FBI).

After completing his training, he was assigned to the bureau’s field office in Springfield, Mo. O’Brien was a firearms instructor at Quantico, Va., and spent the last five years of his FBI career in Dallas. He retired from the bureau in 1950 and went to work for Haroldson L. Hunt in land development. He later entered the oil business working for Dresser-Atlas Industries of Dallas.