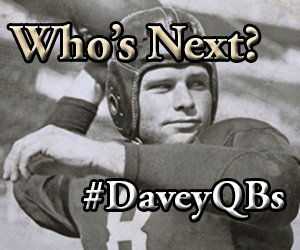 This year’s list, which was compiled by a subset of the Davey O’Brien National Selection Committee, was selected based on player performance during the previous year and expectations heading into the 2015 college football season. All nominees were required to have started at least one game at their current institution previously.

Two of the three Davey O’Brien Award finalists from 2014, TCU’s Trevone Boykin and Mississippi State’s Dak Prescott, headline the list. Both players are back for their senior seasons. In addition, one semifinalist from a year ago, Michigan State senior Connor Cook, also returns.

Appearing on the Watch List is not a requirement for a player to win the Davey O’Brien Award. Quarterbacks from all 128 NCAA Division I Football Bowl Subdivision (FBS) schools are eligible for the award. The field will be narrowed to 16 semifinalists on Monday, Nov. 2. From that list, the Foundation and the Selection Committee will announce the three finalists on Tuesday, Nov. 24. The 2015 Davey O’Brien winner will be announced live on The Home Depot College Football Awards on Thursday, Dec. 10.

The 2015 season marks the ninth year that fans will be invited to participate in the voting process. The Davey O’Brien Fan Vote will be combined with the results from the Selection Committee. Voting will begin on Tuesday, Sept. 1.

* Finished last year as Ohio State’s starting quarterback. The school has not yet named a starter for the 2015 season.

The Davey O’Brien National Quarterback Award is a member of the National College Football Awards Association (NCFAA) which encompasses the most prestigious awards in college football. The 22 awards boast over 700 years of tradition-selection excellence. Visit www.NCFAA.org to learn more about our story.

Beginning in 2015, The Home Depot College Football Awards will have a new home at the College Football Hall of Fame and Chick-fil-A Fan Experience in downtown Atlanta. Airing live on ESPN on December 10, 2015, college football’s brightest stars will be honored for their performance on and off the field.