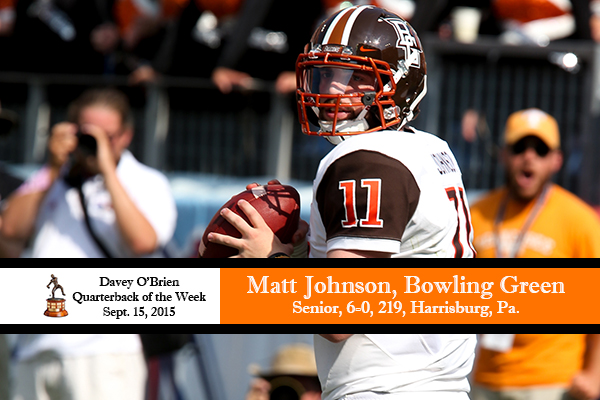 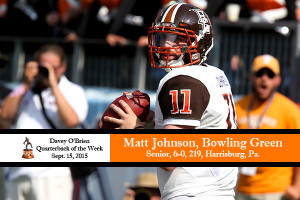 FORT WORTH, Texas (Sept. 15, 2015) – Bowling Green senior Matt Johnson has been tabbed as the second Davey O’Brien Quarterback of the Week honoree in 2015, the Davey O’Brien Foundation has announced.

Johnson leads the nation in passing yards (915) and is tied for second in touchdown passes (8) through the season’s first two weeks. On Saturday, he threw for 491 yards and a school record-tying six touchdowns in a 48-27 win at Maryland.

Johnson, who played in just one game in 2014 before suffering a season-ending hip injury, finished the contest with 36 completions on 55 attempts to help the Falcons secure the team’s first road win over a Power 5 Conference program since 2008.

His 491-yard game ranks second in school history. It was the second week in a row that Johnson threw for a personal best, topping his 424-yard passing effort against Tennessee in the season opener.

The native of Harrisburg, Pa., is the first weekly winner from a non-Power 5 Conference school since East Carolina’s Shane Carden on Sept. 16, 2014.