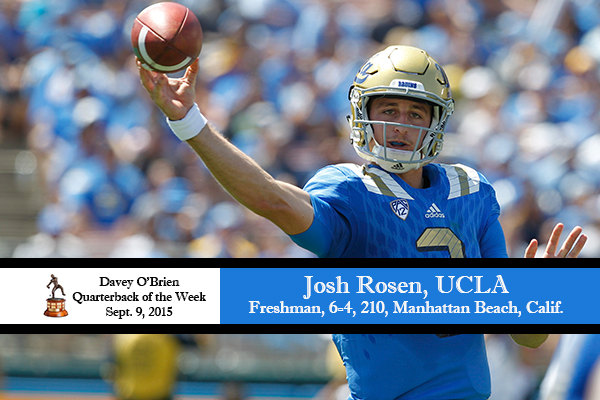 FORT WORTH, Texas (Sept. 9, 2015) – UCLA true freshman Josh Rosen has claimed Davey O’Brien Quarterback of the Week honors for week one of the college football season, the Davey O’Brien Foundation has announced. Rosen is the first freshman to win the weekly accolade since Clemson’s Deshaun Watson (Sept. 30, 2014).

Rosen, the first true freshman quarterback to start a season opener in UCLA history, led the Bruins to a 34-16 victory over Virginia on Saturday. He finished the afternoon 28 of 35 passing for 351 yards and three touchdowns with no interceptions.

Rosen is the first member of the Pac-12 Conference to earn the award since Marcus Mariota of Oregon won in the opening week last season. Mariota ultimately became the 2014 Davey O’Brien National Quarterback Award winner, the first from the Pac-12 since UCLA’s Troy Aikman in 1988.