TCU’s Boykin hauls in Quarterback of the Week honor 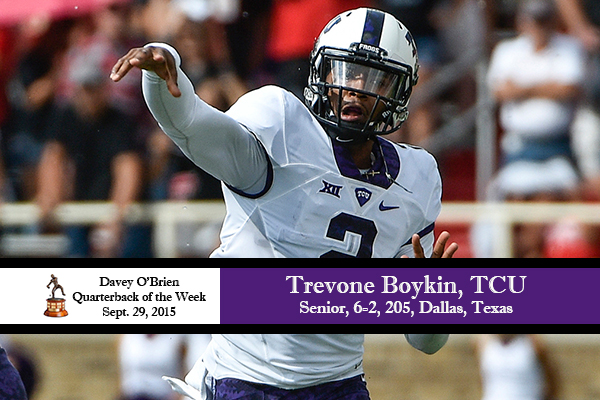 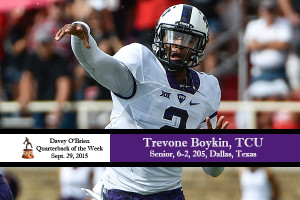 FORT WORTH, Texas (Sept. 29, 2015) – TCU senior Trevone Boykin, a finalist for the 2014 Davey O’Brien National Quarterback Award, has been named the Davey O’Brien Quarterback of the Week for week four of the college football season.

Boykin finished the day 34 of 54 passing for 485 yards with no interceptions. He also had 14 carries for 42 yards. The native of Dallas, Texas, has topped the 500-yard mark in total offense in each of the past two games, accounting for 10 touchdowns over that time.

Nationally this season, Boykin ranks tied for first in points responsible for (96), second in total offense (415.0 yards per game), third in passing yards (1,470) and third in passing touchdowns (14).

It is the second time in his career that Boykin has won the weekly honor, with the first coming on Oct. 28, 2014. He is the second straight winner from the Big 12 Conference, following Oklahoma’s Baker Mayfield, and the sixth winner from the league in the last 11 weeks dating back to last season.

Kyle Allen (Texas A&M) – Led Texas A&M to a comeback win in overtime over Arkansas by completing 21 of 28 passes for 358 yards and 2 scores.