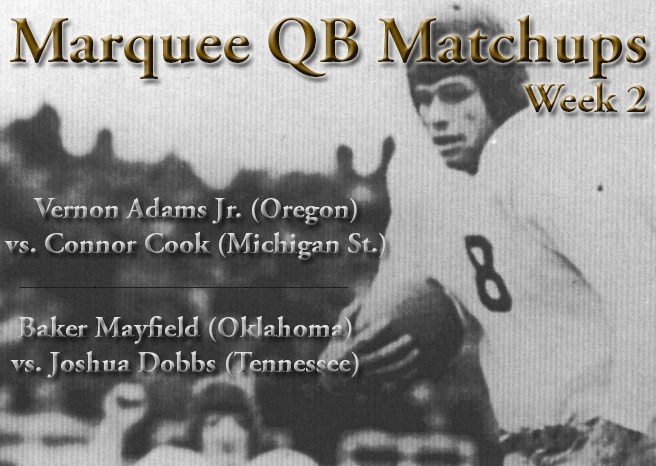 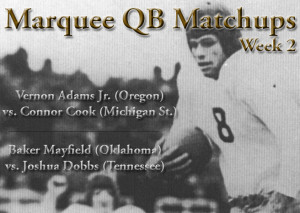 For the second consecutive week, Michigan State senior Connor Cook finds himself locked up in a clash with another of the nation’s best signal callers. This time, on the other sideline is Oregon senior Vernon Adams. Elsewhere on Saturday, juniors Baker Mayfield of Oklahoma and Joshua Dobbs of Tennessee will face off after both players accounted for big games in their respective season openers.

Transfer Vernon Adams Jr. looks to follow in the footsteps of last year’s Davey O’Brien Award winner, Marcus Mariota, in leading Oregon’s potent offensive attack. In Adams’ first game for the Ducks, he finished 19 of 25 for 246 yards and two touchdowns against Eastern Washington, his former school.

A 2014 Davey O’Brien Award semifinalist, Connor Cook will seek revenge against Oregon, which a year ago dealt the Spartan senior one of his three career losses as a starter (24-3 record). Last week at Western Michigan, Cook threw for 256 yards and two scores with no interceptions in a 37-24 win.

Baker Mayfield posted impressive numbers in his Oklahoma debut on Saturday, rolling up 388 passing yards and three passing touchdowns, while also rushing for a score in a 41-3 victory over Akron. The transfer was the Big 12 Offensive Freshman of the Year in 2013 as a member of Texas Tech.

Junior Joshua Dobbs had a fine start to the 2015 campaign in a 59-30 win over Bowling Green. A dual threat, the member of the 2015 Davey O’Brien Award watch list racked up 89 rushing yards and a touchdown on 12 carries. He also completed 15 of 22 passes for 205 yards and a pair of touchdowns.