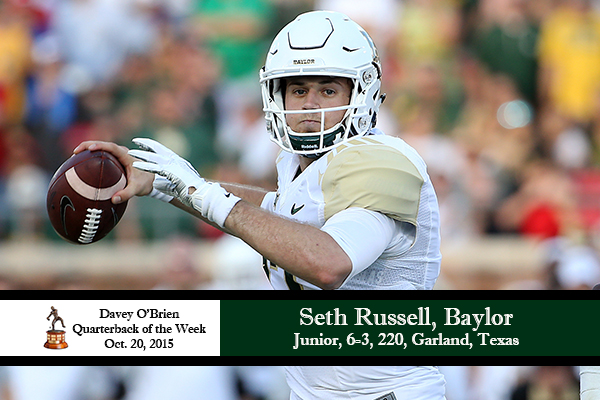 FORT WORTH, Texas (Oct. 20, 2015) – By virtue of a monster performance both through the air and on the ground, Baylor junior Seth Russell has been named the week seven Davey O’Brien Quarterback of the Week.

Russell accumulated 540 yards of total offense (380 passing, 160 rushing) while leading the second-ranked Bears past West Virginia, 62-38, on Saturday afternoon. He accounted for six touchdowns, throwing for five scores and rushing for one.

Russell’s career-high 160 rushing yards, which came on just 14 carries, were the second-most by a quarterback in school annals. The first-year starter also connected on 20 of 33 pass attempts and did not commit a turnover.

Russell is the third quarterback from the Big 12 Conference to land the Davey O’Brien weekly honor this year. In addition, he is the sixth winner from the league in the past 10 weeks dating back to last year. Included in that group is former Baylor teammate Bryce Petty (Oct. 14, 2014).

All 128 FBS quarterbacks are eligible for the weekly award, which is determined by a subset of the Davey O’Brien National Selection Committee. The other “Great 8” quarterbacks in week seven were: Trevone Boykin of TCU, Washington State’s Luke Falk, Everett Golson of Florida State, Notre Dame’s DeShone Kizer, Memphis’ Paxton Lynch, Dak Prescott of Mississippi State and Deshaun Watson of Clemson.