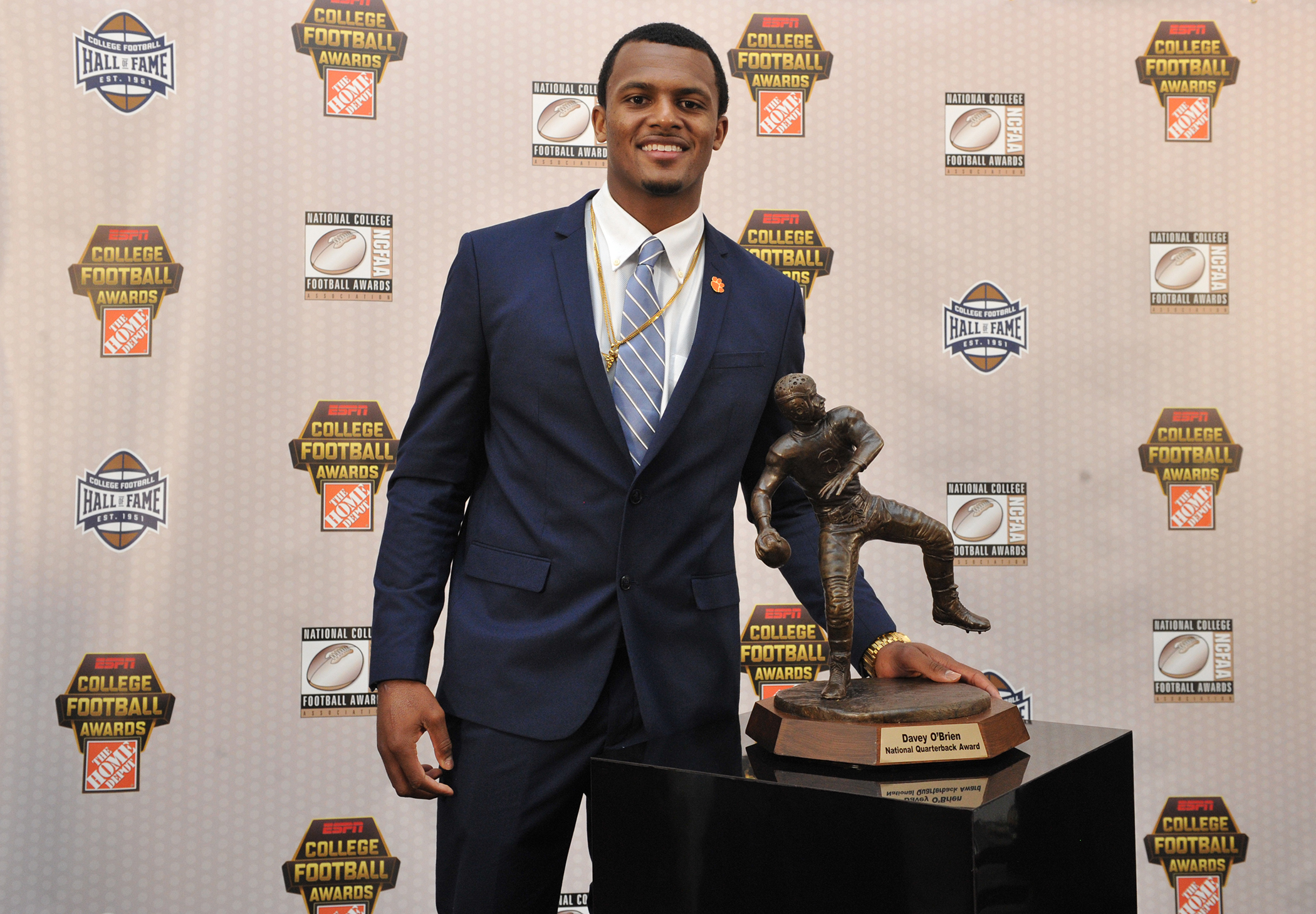 ATLANTA (Dec. 10, 2015) — Clemson sophomore Deshaun Watson has been named the 2015 Davey O’Brien National Quarterback Award winner in a live announcement on The Home Depot College Football Awards on ESPN. Watson is the first winner in Clemson history and just the sixth player younger than a junior to ever claim the trophy.

Watson was selected as the winner over fellow finalists Trevone Boykin (TCU) and Baker Mayfield (Oklahoma) after totaling the ballots from the Davey O’Brien National Selection Committee as well as fan votes recorded at VoteOBrien.org. Watson is also a finalist for the Heisman Trophy, Maxwell Award and Walter Camp Player of the Year.

The dual-threat quarterback has directed the Tigers, the nation’s lone unbeaten team at 13-0, to the No. 1 ranking in the College Football Playoff poll. He is the only player in the country with at least 3,000 passing yards and 800 rushing yards, and is the first player to top those marks since fellow Davey O’Brien winner Johnny Manziel in 2012.

The ACC Player of the Year and ACC Offensive Player of the Year ranks third nationally in total quarterback rating (QBR) with a mark of 86.6. Watson also is third in the NCAA in completion percentage (.695), fifth in points responsible for (246), ninth in passing touchdowns (30), ninth in total offense (338.4) and 11th in passing efficiency (159.6). The third-leading rusher among FBS quarterbacks, he is 16th nationally in passing yards.

The four-time ACC Offensive Back of the Week has accumulated four 100-yard rushing games as well as four 300-yard passing games. He was named a Davey O’Brien “Great 8” quarterback four different weeks during the season.

Watson was voted the Most Valuable Player of the ACC Championship Game after totaling a league title game record 420 yards of total offense in a 45-37 victory over No. 10 North Carolina. He accounted for five touchdowns in all, three through the air and two on the ground.

Watson is the second recipient from an Atlantic Coast Conference school in the past three years, joining Florida State’s Jameis Winston (2013). Watson is the fourth sophomore ever to claim the honor and the first since Oklahoma’s Sam Bradford in 2008.

Watson will be honored at the 39th Annual Davey O’Brien Awards Dinner on Monday, Feb. 15, 2016, in Fort Worth, Texas.