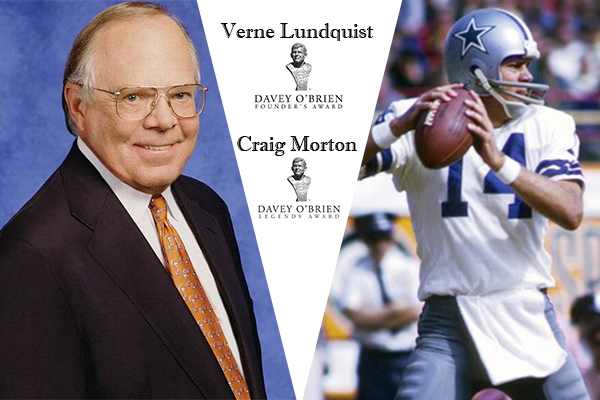 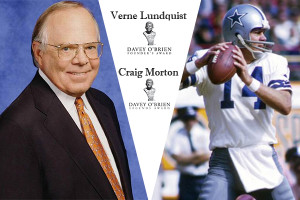 Morton played 18 seasons in the National Football League (1965-82) with the Dallas Cowboys, New York Giants and Denver Broncos. In 1970, Morton led the Cowboys to their first Super Bowl appearance (Super Bowl V), and seven years later he directed the Broncos to Super Bowl XII. He won a Super Bowl ring in 1971 as a member of the Dallas Cowboys.

He was the first quarterback in NFL history to start Super Bowls for two different teams, and remains one of only three, alongside Kurt Warner and Peyton Manning, to accomplish the feat. In addition, Morton is one of just 20 quarterbacks ever to start multiple Super Bowls.

After graduating the Campbell (Calif.) High School, Morton became an All-American at the University of California. He was inducted into the College Football Hall of Fame in 1992 and also is a member of the Cal Athletic Hall of Fame. He was a first-round pick (fifth overall) in the 1965 NFL Draft by Dallas.

“I am so honored to be recognized by the Davey O’Brien Foundation,” Morton said. “The past winners of the Legends Award are giants of the game and heroes to so many. I am humbled to be listed among them.”

Lundquist is the lead play-by-play announcer for CBS Sports’ coverage of college football. He was inducted into the National Sportscasters and Sportswriters Association Hall of Fame in 2007.

Nationally, Lundquist has worked for ABC Sports (1974-81), CBS (1982-95, 1998-present) and TNT (1995-97). He has also called play-by-play on national broadcasts for NFL football, NCAA March Madness, the Masters Tournament, the PGA Championship and the Winter Olympic Games.

The native of Duluth, Minn., is a former radio voice of the Dallas Cowboys who joined the Cowboys Radio Network in 1967 and remained with the team until 1984. He was named the Texas Sportscaster of the Year for seven straight years (1977-83) during his time in Dallas.

“This is truly a tremendous honor,” Lundquist said. “Just being affiliated with the Davey O’Brien Foundation for so many years has been a privilege, and to now have my name associated with both Davey and Charles Ringler is something I will cherish.”

A limited number of individual tickets for the 39th annual Davey O’Brien Awards Dinner are available in the Sunset Room for $250 each, a portion of which is tax deductible. Please contact the Davey O’Brien Foundation at (817) 338-3488 for more information.