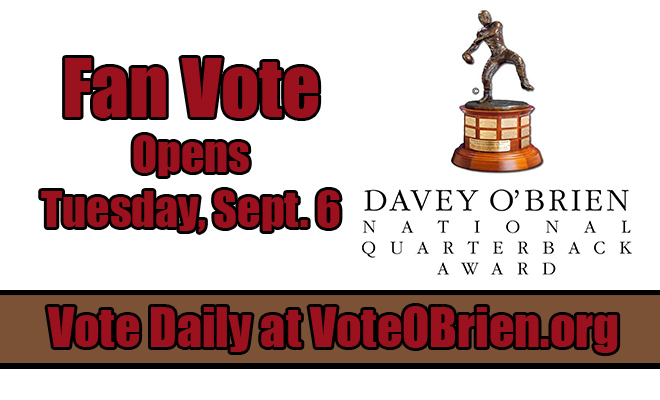 Fans will once again play a role in determining the winner of the Davey O’Brien National Quarterback Award, the oldest and most prestigious quarterback award. Fans may cast votes once daily per registered email address at VoteOBrien.org.

During each round of the voting process, the Fan Vote counts as five percent of the vote total when combined with results from the Davey O’Brien National Selection Committee. The Selection Committee is comprised of journalists, broadcasters, commentators and former winners. Fan Vote totals reset after each voting round.

The first round of voting will take place from Sept. 6 to Nov. 6 and will factor into the naming of the 16 semifinalists on Thursday, Nov. 10. The second round of voting (Nov. 10-20) will help narrow the list to the three finalists on Tuesday, Nov. 22. The third and final round, which will aid in selecting the winner among the three finalists, will be open Nov. 22-Dec. 4.

The 2016 Davey O’Brien winner will be announced on ESPN’s The Home Depot College Football Awards Dec. 8. He will be honored at the 40th Annual Davey O’Brien Awards Dinner on Feb. 20, 2017, in Fort Worth, Texas.

The Fan Vote Process
Round One: Sept. 6 – Nov. 6
Beginning Tuesday, Sept. 6, fans will have all 128 NCAA Division I Football Bowl Subdivision starting quarterbacks to choose from until the voting for semifinalists closes at noon Central Time (CT) on Sunday, Nov. 6.

Round Two: Nov. 10 – Nov. 20
The Fan Vote will re-open Thursday, Nov. 10, following the announcement of the 16 semifinalists. Fans may vote for quarterbacks on the semifinalist list to help determine which three will advance as finalists. Fan voting will close at noon CT on Sunday, Nov. 20.

Round Three: Nov. 22 – Dec. 4
The Fan Vote will re-open for the final round of voting on Tuesday, Nov. 22, following the announcement of the three finalists. Fans may select from the three finalists to help determine the Davey O’Brien Winner. Fan voting will close at noon CT on Sunday, Dec. 4.