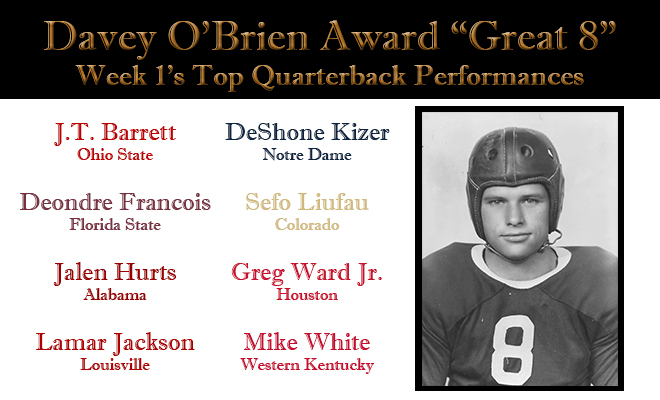 FORT WORTH, Texas (Sept. 7, 2016) – Three quarterbacks making debuts at their respective schools are among the eight players named to the Davey O’Brien Award’s “Great 8” for the first week of the 2016 college football season.

Two of this week’s “Great 8” performers, Francois and Hurts, were freshmen making their collegiate debuts, while White, a junior transfer, was competing for the Hilltoppers for the first time. In addition, two players, Barrett (2014) and Ward (2015) are previous semifinalists for the Davey O’Brien National Quarterback Award.

All 128 FBS quarterbacks are eligible for the weekly honor. The winner of the Davey O’Brien Quarterback of the Week Award, which will be one of the week’s “Great 8” quarterbacks, will be announced Thursday.