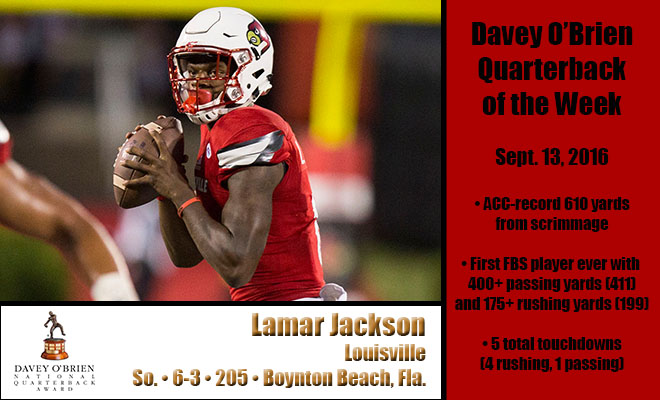 FORT WORTH, Texas (Sept. 13, 2016) – After his record-setting performance on Friday night, Louisville sophomore Lamar Jackson has been named the Davey O’Brien Quarterback of the Week, the Davey O’Brien Foundation has announced.

On the night, he completed 20 of 39 pass attempts with one touchdown. His 411 passing yards marked a career high by more than 100 yards. On the ground, Jackson carried 21 times with a 9.5-yards per carry average. He also set a Louisville record for most rushing touchdowns by a quarterback with four.

Through two games, Jackson has thrown for 697 yards (37-of-62) and seven touchdowns, while rushing 32 times for 318 yards and six scores. He currently ranks among the nation’s top 10 in both rushing yards (3rd) and passing yards (8th). In addition, Jackson leads the NCAA in points responsible for (78) and is second in total offense (507.5).

He is the lone player in the country to be named to the Davey O’Brien “Great 8” both weeks this season.

The native of Boynton Beach, Fla., is the second straight ACC player to win the weekly honor, following Florida State’s Deondre Francois. The two quarterbacks will be on opposing sidelines Saturday in a matchup between two top-10 teams.

The Davey O’Brien Foundation is celebrating its 40th anniversary in 2016. The Davey O’Brien National Quarterback Award winner will be announced on Dec. 8 during ESPN’s The Home Depot College Football Awards. The winner is not required to have won a weekly award during the season. A list of 16 semifinalists will be announced on Nov. 10, while the three finalists will be named on Nov. 22.