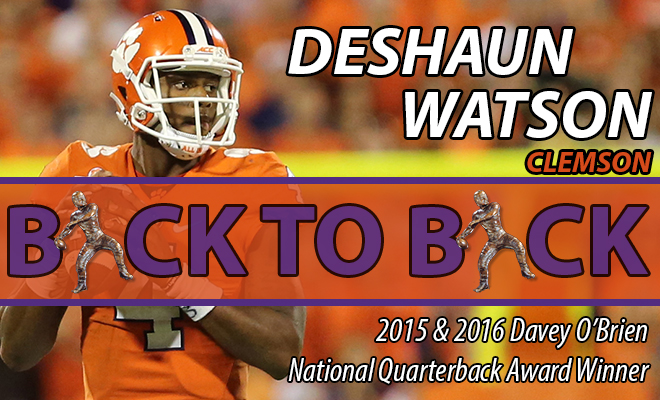 FORT WORTH, Texas (Dec. 8, 2016) – Clemson junior Deshaun Watson became the first player to repeat as the Davey O’Brien National Quarterback Award winner in more than a decade when the announcement was made live on ESPN’s The Home Depot College Football Awards.

Watson is the fourth two-time winner of the nation’s oldest and most prestigious college quarterback award, and the first since Oklahoma’s Jason White in 2003-04. The other multi-time recipients include BYU’s Ty Detmer (1990-91) and Florida’s Danny Wuerffel (1995-96).

In the closest vote since becoming a quarterback-only award in 1981, Watson was selected as the winner over fellow finalists Lamar Jackson (Louisville) and Baker Mayfield (Oklahoma).

Ballots were tabulated from the Davey O’Brien National Selection Committee, which includes select media members and all former winners, and combined with the fan votes recorded at VoteOBrien.org, which accounted for five percent of the process. In order to honor its namesake, committee members are asked to consider the following criteria: quarterback skills, reputation as a team player, character, leadership, sportsmanship, athletic ability and academics.

Watson has guided the Tigers to a 12-1 overall record and a No. 2 ranking in the College Football Playoff ranking. On Dec. 31, he will lead Clemson into a national semifinal matchup against No. 3 Ohio State in the Fiesta Bowl.

Over his final two games, the Tiger accounted for nine passing touchdowns and two rushing scores. In the ACC Championship Game, a 42-35 victory over Virginia Tech, he was 23-for-34 for 288 yards and three touchdowns and rushed 17 times for 85 yards and two touchdowns.

He threw for better than 300 yards six times on the season, including an ACC-record 580 against Pittsburgh. In a 42-36 victory on Oct. 1 over then-No. 3 Louisville, Watson was 20-of-31 for 306 yards and five touchdowns. He earned Davey O’Brien National Quarterback of the Week recognition on Oct. 4 and Nov. 1.

It is the third time in the past four years that the award winner has come from an Atlantic Coast Conference school, as Jameis Winston of Florida State won in 2013. Watson’s 37 touchdown passes are a Clemson season record and rank second in ACC history behind Winston’s 40 in 2013.

Watson is a finalist for the Heisman Trophy, which will be announced Saturday. Five of the last six players to win the Davey O’Brien Award—Cam Newton (2010), Robert Griffin III (2011), Johnny Manziel (2012), Winston (2013) and Marcus Mariota (2014)—went on to be awarded the Heisman Trophy. Dating back to 2006, eight of the 10 O’Brien winners also claimed the Heisman.

Watson will be honored at the 40th Annual Davey O’Brien Awards Dinner on Monday, Feb. 20, 2017, in Fort Worth, Texas.

The award is overseen by the Davey O’Brien Foundation, which is headquartered in Fort Worth, Texas, and has given away more than $1 million in scholarships and university grants to help high school and college athletes transform leadership on the field into leadership in life. For more information, visit www.DaveyOBrien.org. The 2016 Davey O’Brien winner will be honored at the 40th Annual Davey O’Brien Awards Dinner on Feb. 20, 2017, in Fort Worth.