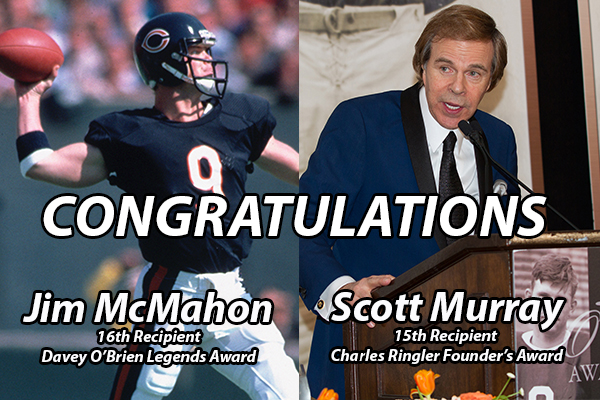 FORT WORTH, Texas (Jan. 13, 2017) – The Davey O’Brien Foundation has announced that Jim McMahon, the inaugural winner of the Davey O’Brien National Quarterback Award, will be honored alongside two-time award winner (2015, 2016) Deshaun Watson of national champion Clemson.

McMahon, the 1981 Davey O’Brien Award winner, is the 16th Davey O’Brien Legends Award recipient. He becomes the first player to be honored by the foundation as a collegian and following a professional career. The Legends Award was established in 2001 to commemorate the 25th anniversary of the foundation by recognizing a quarterback who has made significant contributions to the game of football on and off the field.

McMahon was a two-time All-American (1980, 1981) at BYU before being selected by the Chicago Bears in the first round (fifth overall) of the 1982 National Football League Draft. The 1982 UPI NFC Rookie of the Year played a total of 119 NFL games over 15 seasons for the Bears, San Diego Chargers, Philadelphia Eagles, Minnesota Vikings, Arizona Cardinals and Green Bay Packers.

McMahon finished his college career with 9,536 passing yards and 84 touchdown passes, and broke 75 NCAA records. He was inducted into the College Football Hall of Fame in 1999. After completing his bachelor’s degree in communications, McMahon was elected into the BYU Athletics Hall of Fame in 2014 and had his No. 9 jersey retired.

As a senior in 1981, McMahon passed for 3,555 yards and 30 touchdowns en route to claiming the Davey O’Brien Award. He also was Western Athletic Conference Player of the Year, unanimous first-team All-WAC, first-team All-America by five different organizations and finished third in Heisman Trophy balloting.

Additionally, the foundation has announced Scott Murray as this year’s Charles Ringler Founder’s Award honoree. Murray, a longtime Dallas-Fort Worth sports personality, has been a member of the Davey O’Brien Foundation’s Board of Trustees for nearly three decades and has served as chairman of the Legends Award and Founder’s Award committees.

The Founder’s Award honors an individual or corporation devoted to the foundation that has exhibited the same passion, pride and perseverance as Ringler, who was responsible for establishing the Davey O’Brien Foundation and Davey O’Brien Memorial Trophy. His vision and steadfast commitment helped the original award become the Davey O’Brien National Quarterback Award in 1981.

Murray spent 22 years at NBC 5 (KXAS) in Dallas/Fort Worth, where he won Heartland Regional Emmy Awards for his work in 2000 and 2001. In 2012, Murray received the Silver Circle Lifetime Achievement Award from the National Academy of Television Arts and Sciences.

Since he left KXAS in 2003, Murray has remained active by serving as emcee for corporate and charitable events, including the Davey O’Brien Award Dinner. Murray is now the Chairman/CEO of Murray Media, an audio/visual event media company. He also serves on the board or advisory boards for numerous charitable and non-profit organizations.

All three award recipients, along with the to-be-named Davey O’Brien High School Scholarship winner, will be honored at the 40th Annual Davey O’Brien Awards Dinner at the Fort Worth Club on Monday, Feb. 20.

A limited number of individual tickets are available in the Sunset Room for $200 each, a portion of which is tax deductible. Please contact the Davey O’Brien Foundation at (817) 338-3488 for more information.