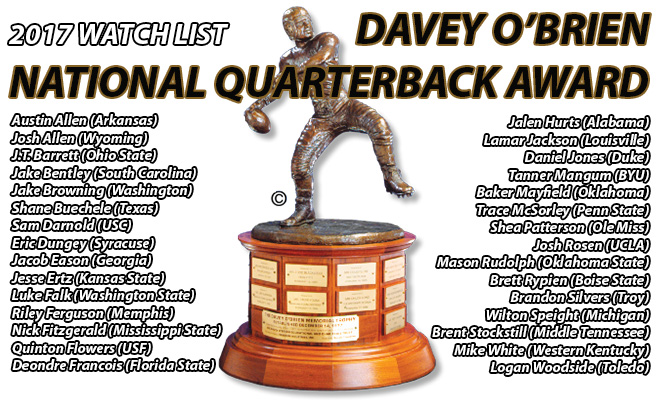 Compiled by a subset of the Davey O’Brien National Selection Committee, this year’s list was selected based on player performance during the previous year and expectations heading into the 2017 college football season. All nominees are required to have previously started at least one game at their current institution.

Two finalists for last year’s award, Lamar Jackson of Louisville and Oklahoma’s Baker Mayfield, headline the list. It was Mayfield’s second straight season as a finalist.

Eleven seniors, 11 juniors and eight sophomores comprise the list. Among leagues, the SEC led the way with six selections, while the ACC, Big 12 and Pac-12 had four apiece.

Appearing on the Watch List is not a requirement for a player to win the Davey O’Brien National Quarterback Award. Quarterbacks from all 130 NCAA Division I Football Bowl Subdivision (FBS) schools are eligible for the award.

Sixteen semifinalists for the award will be named on Tuesday, Nov. 7. From that list, the Foundation and the Selection Committee will announce the three finalists on Monday, Nov. 20. The 2017 Davey O’Brien Award winner will be announced live Thursday, Dec. 7, on The Home Depot College Football Awards.

The 2017 season marks the 11th year that fans will be invited to participate in the voting process on VoteOBrien.org. Results from the Davey O’Brien Fan Vote will be combined with the ballots from the Selection Committee. Fan voting, which accounts for five percent of the total balloting, will begin on Tuesday, Sept. 5.

The Davey O’Brien National Quarterback Award is presented annually to the nation’s best college quarterback and is the oldest and most prestigious national quarterback award. The Davey O’Brien Award honors candidates who exemplify Davey O’Brien’s enduring character while exhibiting teamwork, sportsmanship and leadership in both academics and athletics. The award is overseen by the Davey O’Brien Foundation, which is headquartered in Fort Worth, Texas, and has given away more than $1 million in scholarships and university grants to help high school and college athletes transform leadership on the field into leadership in life. For more information, visit www.DaveyOBrien.org.

The Davey O’Brien National Quarterback Award is a member of the National College Football Awards Association (NCFAA), which encompasses college football’s most prestigious awards. Founded in 1997, the NCFAA and its 23 awards now boast over 800 recipients, dating to 1935. Visit ncfaa.org to learn more about our story.