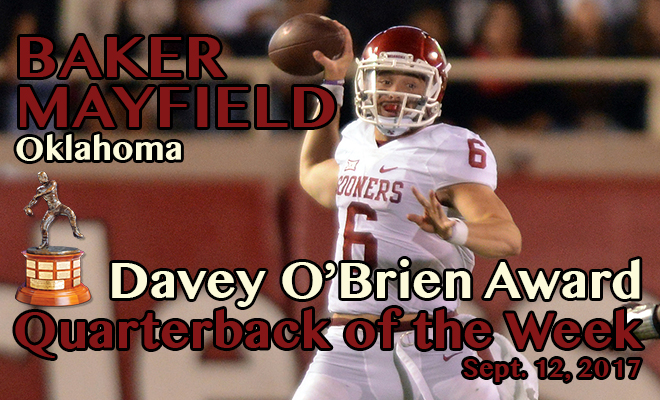 Oklahoma senior was dominant in second half of victory over No. 2 Ohio State

FORT WORTH, Texas (Sept. 12, 2017) – For the fourth time in his career, Oklahoma’s Baker Mayfield has been named the Davey O’Brien Quarterback of the Week, the foundation announced today.

Through two games this season, the native of Austin, Texas, has completed 83.6 percent of his passes (46 for 55) for 715 yards and six touchdowns with no interceptions for a 228.8 NCAA quarterback rating. For his efforts on Saturday, Mayfield also was named the Big 12 Offensive Player of the Week for the second straight week.

All FBS quarterbacks are eligible for the weekly accolade, which is determined by a subset of the Davey O’Brien National Selection Committee. The other “Great 8” quarterbacks in week two were: Sam Darnold of USC, Oregon’s Justin Herbert, Lamar Jackson of Louisville, Duke’s Daniel Jones, Shane Morris of Central Michigan, Iowa’s Nate Stanley and Brent Stockstill of Middle Tennessee.