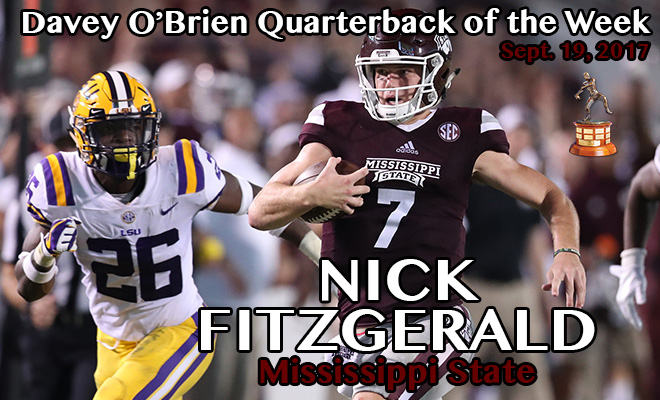 Junior accounted for four touchdowns in impressive win over LSU

FORT WORTH, Texas (Sept. 19, 2017) – Mississippi State’s Nick Fitzgerald has been named the Davey O’Brien Quarterback of the Week for his performance on Saturday against No. 7 LSU, according to a vote by a subset of the Davey O’Brien National Selection Committee.

Fitzgerald helped guide the Bulldogs to a dominating 37-7 win by accounting for four touchdowns. The SEC Offensive Player of the Week also totaled 268 yards of offense. Entering the game, LSU had allowed just 10 total points and an average of 169.5 yards of offense per contest.

Fitzgerald completed 15-of-23 passes for 180 yards and two touchdowns, and added 88 yards rushing (6.3 yards per carry) with two ground scores. The 30-point margin of victory was the largest for Mississippi State in its 111-game series against the Tigers.

In three games this season, Fitzgerald has thrown seven touchdown passes against just one interception, and has collected five rushing touchdowns. He ranks third nationally in points responsible for (72).