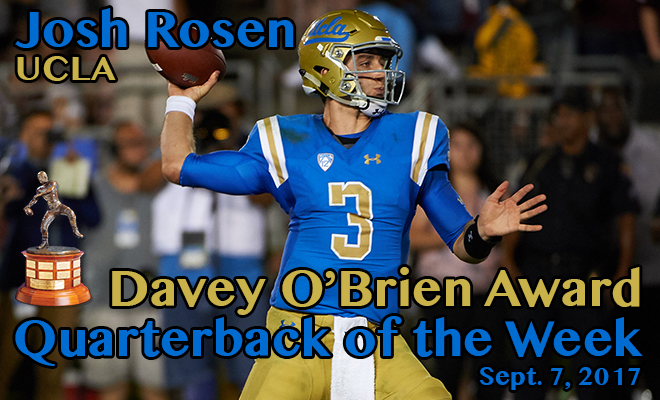 FORT WORTH, Texas (Sept. 7, 2017) – UCLA’s Josh Rosen has been named the Davey O’Brien Quarterback of the Week for the second time in his career, the foundation announced today.

The Rosen-led Bruins posted an improbable 45-44 season-opening comeback win over Texas A&M after trailing 44-10 in the second half. Rosen passed for 292 yards and four touchdowns in the game’s final quarter.

The Bruins’ 34-point come-from-behind victory was the largest in UCLA history and the second largest ever in FBS history, behind only Michigan State’s 35-point rally against Northwestern in 2006.

Rosen, a native of Manhattan Beach, Calif., previously was honored on Sept. 9, 2015, after he went 28-for-35 passing for 351 yards and three scores as a true freshman in the team’s season opener.

Rosen, who was named to the 2017 Davey O’Brien National Quarterback Award’s preseason watch list, was a semifinalist for the yearly award in 2015. He is the first Pac-12 quarterback to win the weekly award since Washington’s Jake Browning on Oct. 11, 2016.

All FBS quarterbacks are eligible for the weekly accolade, which is determined by a subset of the Davey O’Brien National Selection Committee. The other “Great 8” quarterbacks in the opening week were: California’s Ross Bowers, Lamar Jackson of Louisville, Missouri’s Drew Lock, TaQuon Marshall of Georgia Tech, Oklahoma’s Baker Mayfield, Shea Patterson of Ole Miss and Oklahoma State’s Mason Rudolph.