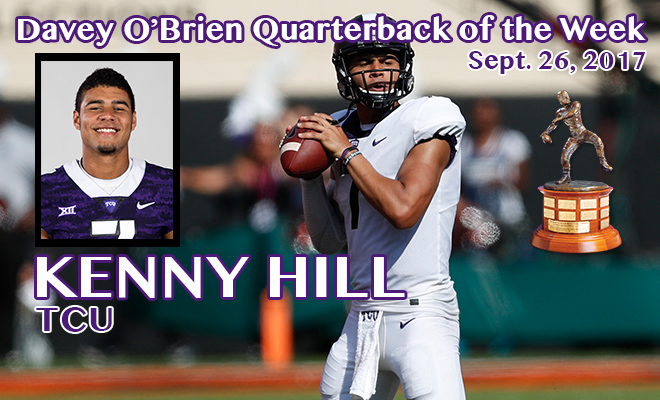 Senior led Horned Frogs to win over No. 6 Oklahoma State

FORT WORTH, Texas (Sept. 26, 2017) – A subset of the Davey O’Brien National Selection Committee has voted TCU’s Kenny Hill as the Davey O’Brien Quarterback of the Week for his week four performance Saturday against No. 6 Oklahoma State.

Hill steered the Horned Frogs to a 44-31 victory over the Cowboys, the team’s first triumph in Stillwater, Okla., since 1991. The senior finished the afternoon 22-of-33 passing for 228 yards and a score.

The Horned Frogs led by as many as 20 points in the fourth quarter and controlled the ball for more than 39 minutes in the contest.

In four games this season, the senior from Southlake, Texas, has thrown nine touchdown passes against three interceptions, while completing 72.6 percent of his passes (85-of-117). Hill joins three-time honoree Trevone Boykin (Oct. 28, 2014; Sept. 29, 2015; Nov. 4, 2015) as recent Quarterback of the Week winners from TCU.