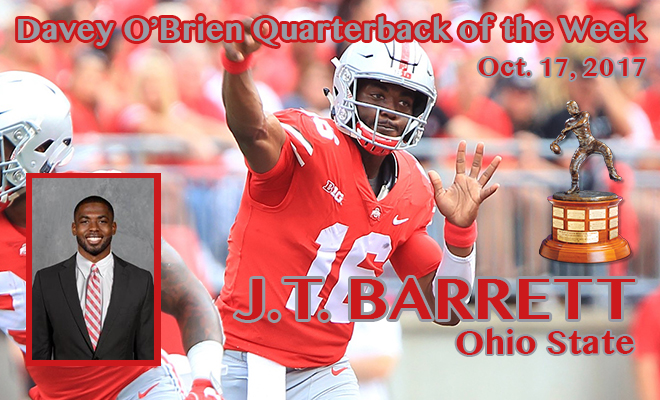 Senior matched his own school record with seven total touchdowns

FORT WORTH, Texas (Oct. 17, 2017) – For the second time in his career, Ohio State senior J.T. Barrett has been selected the Davey O’Brien National Quarterback of the Week. He was previously honored on Oct. 18, 2016.

Barrett tied his own school record by accounting for seven touchdowns (five passing, two rushing) in just over three quarters of action in a 56-14 road win over Nebraska. Barrett had just six incompletions on the day, completing 27-of-33 attempts for 325 yards. In addition, he rushed 10 times for 48 yards, giving him 373 yards of total offense.

The native of Wichita Falls, Texas, currently leads the nation in points responsible for (158) and is tied for first with 21 touchdown passes. Barrett ranks fourth in the country in passing efficiency (173.8) and also is among the NCAA’s best in total offense (13th, 313.9), passing yards (14th, 1,838) and completion percentage (15th, .667). In 207 attempts, he has thrown just one interception on the year.