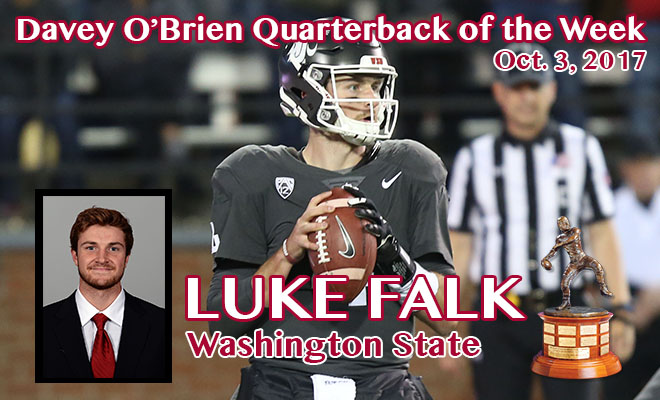 FORT WORTH, Texas (Oct. 3, 2017) – After leading Washington State past No. 5 USC on Friday night, Luke Falk has been voted the Davey O’Brien Quarterback of the Week for the second time in his career.

Falk finished the 30-27 victory over the Trojans by completing 34-of-51 passes for 340 yards and two touchdowns. During the contest, the senior became the Pac-12 Conference’s all-time career completions leader (1,211) and moved into second place on the league’s career list for passing touchdowns (105).

Falk was previously named the Davey O’Brien Quarterback of the Week on Nov. 9, 2016. The native of Logan, Utah, has been a semifinalist for the National Quarterback Award each of the past two seasons.