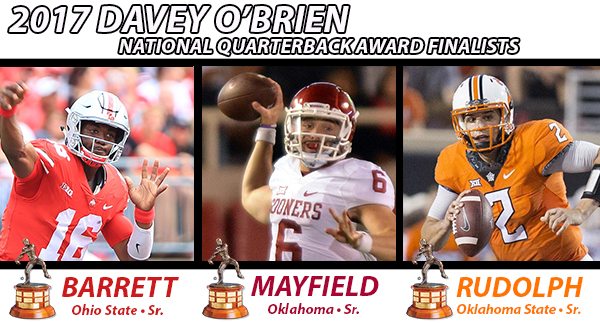 After totaling the ballots from the Davey O’Brien National Selection Committee as well as fan votes recorded over the past two weeks at VoteOBrien.org, the 16 semifinalists were narrowed down to the trio of signal callers. They will be featured on ESPNU’s The Home Depot College Football Awards Nomination Special Tuesday at 6:30 p.m. (ET)/5:30 p.m. (CT).

Mayfield (2015-17) becomes the first player to be a three-time finalist since the award began naming just three finalists in 1991. Barrett and Rudolph are both among the top three for the first time.

The three members of the group earned Davey O’Brien “Great 8” weekly honors a total of 13 times this season. They also combined to collect four of the season’s 11 National Quarterback of the Week accolades from the Foundation.

Barrett has connected on 214 of 320 passes for 2,698 yards and 32 touchdowns. On the ground, he has rushed 115 times for 605 yards and eight scores. Barrett has accounted for at least three touchdowns in 10 of 11 games on the year. He snagged Davey O’Brien “Great 8” weekly honors three times during the season, and was named National Quarterback of the Week twice (Oct. 17 and Oct. 31).

Ohio State ranks third in the nation in both total offense (546.2) and scoring offense (44.9). The Buckeyes are 9-2 on the year and are ranked among the top 10 in the most recent College Football Playoff Rankings, Associated Press Top 25 and Coaches’ Poll. Barrett is attempting to become the Buckeyes’ second Davey O’Brien winner, joining Troy Smith (2006).

Mayfield has completed 233 of 329 pass attempts for 3,816 yards and 34 touchdowns. In addition, he has gained 240 yards on the ground with five rushing scores. Mayfield has posted eight 300-yard passing games and has thrown multiple touchdown passes in every game this year. The Austin, Texas, product earned Davey O’Brien “Great 8” weekly honors a national-best six times this season, and was voted National Quarterback of the Week twice (Sept. 12 and Nov. 8).

Mayfield has helped 10-1 Oklahoma to top 5 rankings in the latest College Football Playoff, Associated Press and Coaches’ Polls. Oklahoma tops the nation in total offense (588.7) and is fifth in scoring offense (44.0). He is looking to join Jason White (2003, 2004) and Sam Bradford (2008) as Sooners who have won the Davey O’Brien Award.

Rudolph is 266-for-414 passing for 4,115 yards and 33 touchdowns. On the ground, he has added eight touchdowns. Rudolph has amassed nine 300-yard passing games, including four games with more than 400 yards. In addition, he threw at least three touchdowns strikes in nine of 11 games.

Oklahoma State is 8-3 on the year and is ranked in the top 25 in the latest College Football Playoff Rankings, Associated Press Top 25 and Coaches’ Polls. The Cowboys are second nationally in both total offense (567.9) and scoring offense (45.2). Rudolph is attempting to become the school’s first-ever Davey O’Brien Award winner.

The Davey O’Brien Fan Vote counts as five percent during each round of the voting process, and is combined with the results from the foundation’s national selection committee, which is comprised of journalists, broadcasters, commentators and former winners.

After clearing the semifinalist round totals, the fan vote at VoteOBrien.org will reopen today (Nov. 20) and remain open until noon (CT) on Sunday, Dec. 3, for the final round of balloting. Fans are invited to cast their vote for the nation’s best college quarterback as often as once daily per email address.

The 2017 Davey O’Brien National Quarterback Award winner will be announced live on The Home Depot College Football Awards Thursday, Dec. 7. All three finalists will attend the festivities that day in Atlanta, Ga.

The 41st Annual Davey O’Brien Awards Dinner will be held Monday, Feb. 19, 2018, at The Fort Worth Club in Fort Worth, Texas.