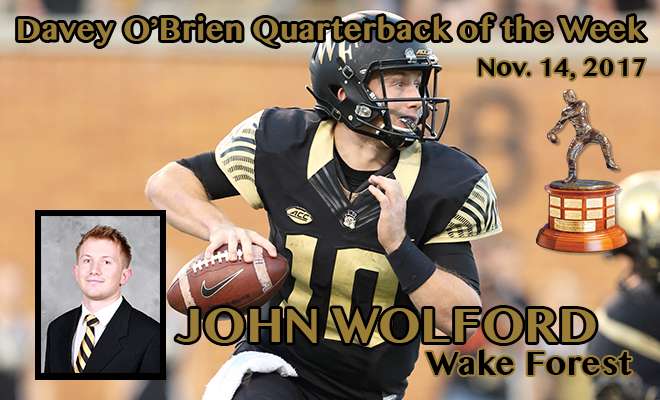 Senior accounted for 499 yards of offense and six touchdowns

Wolford amassed a career-high 499 yards of total offense as the Demon Deacons set a school record with 734 yards in a 64-43 victory over Syracuse on Saturday. In addition, he equaled the Wake Forest standard by accounting for six touchdowns. It was the second time in three weeks that he accomplished that feat.

On the day, Wolford completed 25 of 38 passes for 363 yards and three touchdowns. It was his third consecutive 300-yard passing game. He also rushed 19 times for a career-best 136 yards and three scores.

Wolford helped Wake Forest erase a 38-24 halftime deficit by completing 12 of 18 passes for 156 yards and two touchdowns in the second half. He also had 10 carries for 91 yards and a pair of scores. Wolford’s efforts put him on the Davey O’Brien Great 8 list the second time this season.