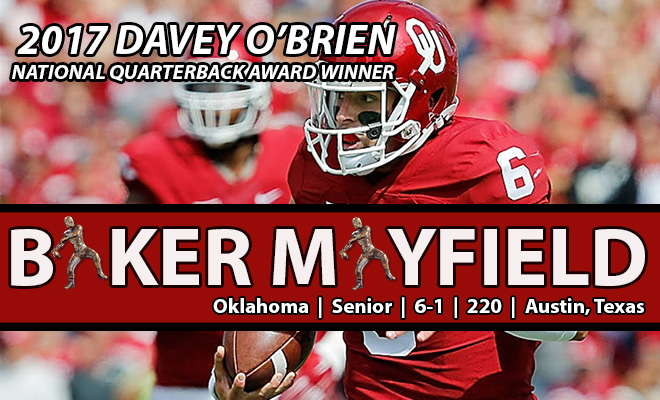 Mayfield joins Jason White (2003-04) and Sam Bradford (2008) as winners from Oklahoma. The Austin, Texas, product is the first recipient from the Big 12 Conference since Baylor’s Robert Griffin III in 2011. He is the eighth quarterback winner to star as a prep in O’Brien’s home state of Texas, joining Michael Bishop, Ty Detmer, Griffin, Johnny Manziel, Colt McCoy, Andre Ware and Vince Young.

In 2017, the senior has thrown for more than 300 yards eight times, including a school record total of 598 against Oklahoma State. Mayfield also has at least three touchdown strikes in five straight games, including a season-best five against the instate rival Cowboys. His passing efficiency rating currently is the best in NCAA history.

The Big 12 champion Sooners own a 12-1 record and earned a berth in the College Football Playoff as the No. 2 seed. In the Big 12 Championship Game against TCU on Saturday, Mayfield completed 15-of-23 passes for 243 yards, four touchdowns and no interceptions. He also added 65 yards rushing on just six carries, and was named the game’s Most Outstanding Player.

Including Mayfield, over the past 10 years, the Davey O’Brien Award winners’ teams have combined for an overall record of 127-13 (.907). He is the fourth straight winner to lead his team to the College Football Playoffs, joining Oregon’s Marcus Mariota (2014) and Clemson’s Deshaun Watson (2015, 2016). Two winners in the past five years ultimately claimed National Championships (Florida State’s Jameis Winston in 2013 and Watson in 2016).

Ballots were tabulated from the Davey O’Brien National Selection Committee, which includes select media members and all former winners, and combined with the fan votes recorded at VoteOBrien.org, which accounted for five percent of the process.

The other two finalists were Ohio State senior J.T. Barrett and Oklahoma State senior Mason Rudolph. Mayfield has the distinction of being the first-ever three-time finalist for the award (2015-17). He also was named the Davey O’Brien National Quarterback of the Week twice this season (Sept. 12 and Nov. 9) to give him a record five career honors.

Mayfield, who also was named the AP Player of the Year on Thursday, is a finalist for the Heisman Trophy, which will be announced Saturday. Five of the last seven players to win the Davey O’Brien Award—Cam Newton (2010), Griffin (2011), Manziel (2012), Winston (2013) and Mariota (2014)—went on to be awarded the Heisman Trophy. Dating back to 2006, eight of the 11 O’Brien winners also claimed the Heisman.

Mayfield will be honored at the 41st Annual Davey O’Brien Awards Dinner on Monday, Feb. 19, 2018, in Fort Worth, Texas.

The award is overseen by the Davey O’Brien Foundation, which is headquartered in Fort Worth, Texas, and has given away more than $1 million in scholarships and university grants to help high school and college athletes transform leadership on the field into leadership in life. For more information, visit www.DaveyOBrien.org. The 2017 Davey O’Brien winner will be honored at the 41st Annual Davey O’Brien Awards Dinner on Feb. 19, 2018, in Fort Worth.