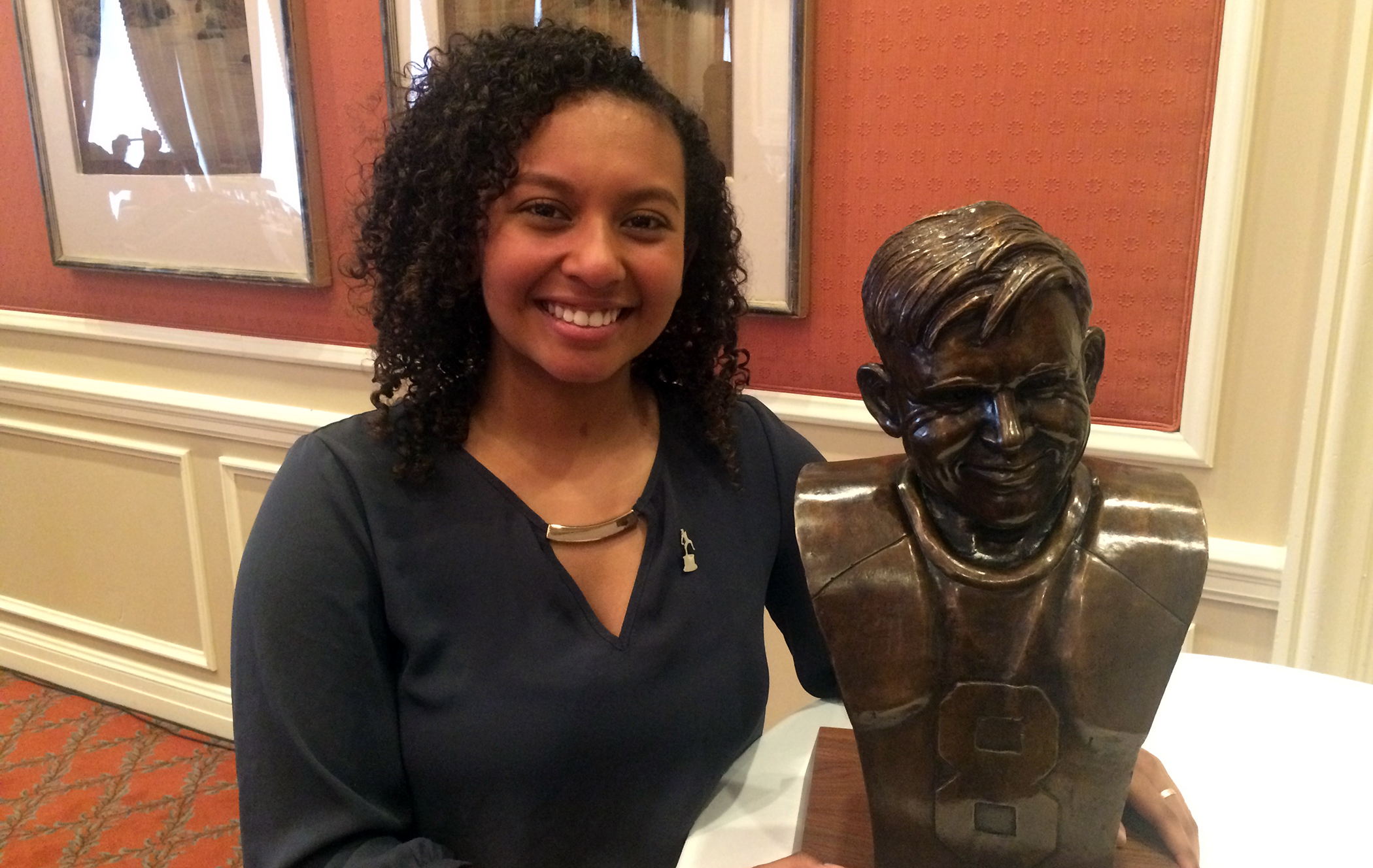 FORT WORTH, Texas (Jan. 23, 2018) – At its annual luncheon at The Fort Worth Club, the Davey O’Brien Foundation announced that Mikayla Wilson of Green B. Trimble Technical High School in Fort Worth is the recipient of the 32nd Annual Davey O’Brien High School Scholarship Award.

Wilson is the first-ever winner from Trimble Tech, and is the second winner from the Fort Worth Independent School District (FWISD) in the past four years. Since the award’s inception in 1986, she is the sixth winner from the district.

The $30,000 scholarship is partially underwritten by Higginbotham and Southwest Bank. Recipients of the Davey O’Brien High School Scholarship are chosen on the basis of scholastic achievements, community service, character, leadership and varsity sports participation.

“We are excited to announce that Mikayla Wilson has been selected as this year’s Davey O’Brien High School Scholarship winner,” chairman of the scholarship selection committee David O’Brien Jr. said. “Mikayla is a truly impressive young woman, and we know she will continue the strong legacy established by all the previous recipients.”

Wilson is ranked first in her class of 361 students at Trimble Tech with a 4.46 grade-point average on a 4.0 scale. She is a two-year President of the National Honor Society and a member of Key Club International. In addition, she has received major awards from the FWISD four times, as she was named a Superintendent Scholar and also collected three Ann Brannon Awards.

As a junior, she secured the George Eastman Young Leaders Award. She also has been involved in the Natural Helpers Club and student council. Wilson is interested in pursing astrophysics.

“Mikayla is a young woman I know is headed for success,” Trimble Tech College and Career Readiness Coach My Jones wrote in her letter of recommendation. “She possesses a charismatic personality, whose positivity radiates around her. There is no doubt in my mind that Mikayla will thrive in whatever situation she is placed in.”

Wilson has competed on the Bulldogs’ varsity softball team since her freshman year, and is a three-time all-district performer heading into her senior season. She has earned District 7-5A first-team honors once and second-team accolades twice. She also participated in volleyball for three years.

Wilson has been active in community service, most extensively with youth at the RD Evans Community Center. She also has been involved with Beat the Streets, Mobile Food Pantry, Optimist Club, Turkey Trot and Honored Hero Run.

“Mikayla has a true servant’s heart,” Trimble Tech softball coach and geometry teacher Ladine Thomas wrote. “As a coach and educator, I feel blessed to have gotten to spend time with Mikayla on her journey. All too often we find ourselves wishing to have one or two more just like these ‘special kids.’ She will do amazing things.”