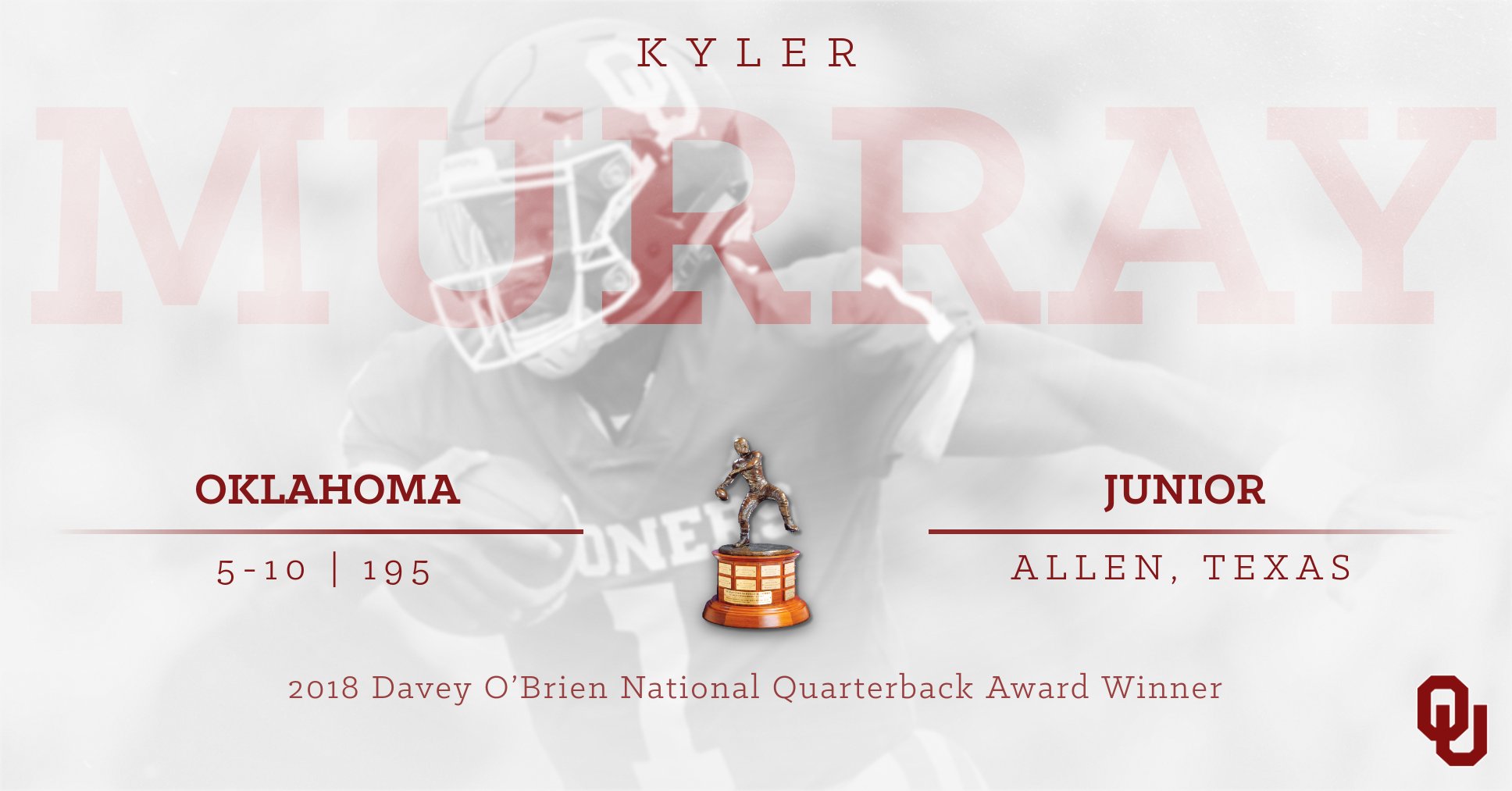 FORT WORTH, Texas (Dec. 6, 2018) – Oklahoma junior Kyler Murray has been named the 2018 Davey O’Brien National Quarterback Award winner, becoming the fourth different Sooners player ever to claim the nation’s oldest and most prestigious quarterback trophy. He is the second straight honoree from the school.

Murray joins Jason White (2003-04), Sam Bradford (2008) and Baker Mayfield (2017) as winners from Oklahoma. The five Davey O’Brien Awards won by Oklahoma quarterbacks are the most by any school in the nation, surpassing BYU’s four.

The Big 12 champion Sooners own a 12-1 record and earned a berth in the College Football Playoff as the No. 4 seed. In the Big 12 Championship Game against Texas on Saturday, Murray completed 25 of 34 passes for 379 yards and three touchdowns with no interceptions. The game’s Most Outstanding Player also added 39 yards rushing to top the 400-total yard mark (418) for the sixth time in 2018.

Murray is ahead of Mayfield’s all-time NCAA passing efficiency record of 203.7 set last year. He also is the first player in history to enter the bowl season averaging more than 300 passing yards (311.8) and 60 rushing yards (68.6). His 51 total touchdowns accounted for are the most by an O’Brien winner since Oregon’s Marcus Mariota (57) in 2014.

Including Murray, over the past 11 years, the Davey O’Brien Award winners’ teams have combined for an overall record of 139-14 (.908). He is the fifth straight winner to lead his team to the College Football Playoffs, joining Mariota (2014), Clemson’s Deshaun Watson (2015, 2016) and Mayfield (2017). Two winners in the past five years ultimately claimed national championships (Florida State’s Jameis Winston in 2013 and Watson in 2016).

The other two finalists were Washington State senior Gardner Minshew II and Alabama sophomore Tua Tagovailoa. Ballots were tabulated from the Davey O’Brien National Selection Committee, which includes select media members and all former winners, and combined with the fan votes recorded at VoteOBrien.org, which accounted for five percent of the process.

Murray will be honored at the 42nd Annual Davey O’Brien Awards Dinner on Monday, Feb. 18, 2019, in Fort Worth, Texas.

The award is overseen by the Davey O’Brien Foundation, which is headquartered in Fort Worth, Texas, and has given away more than $1 million in scholarships and university grants to help high school and college athletes transform leadership on the field into leadership in life. For more information, visit www.DaveyOBrien.org.