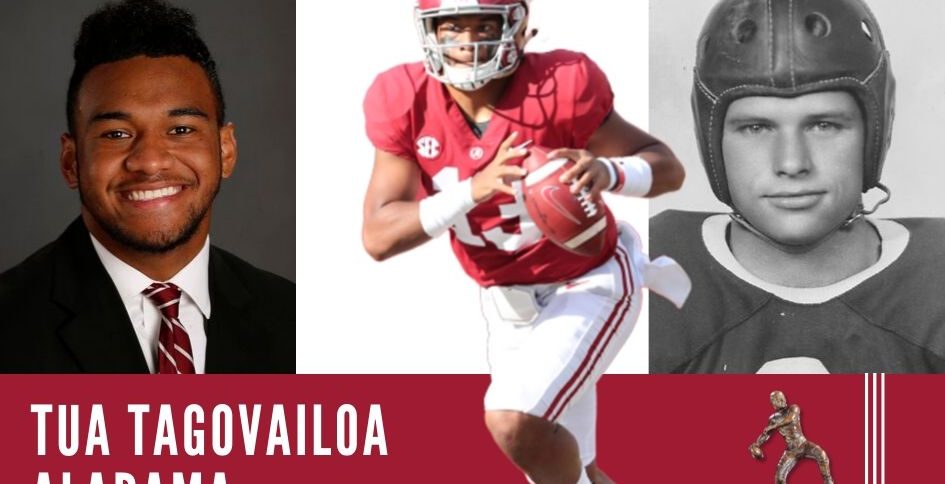 FORT WORTH, Texas (Oct. 1, 2019) – Alabama’s Tua Tagovailoa, a finalist for the 2018 Davey O’Brien National Quarterback Award, has been selected as the Davey O’Brien Foundation’s Quarterback of the Week for the second time in the past three weeks.

Tagovailoa totaled seven touchdowns (six passing, one rushing) and completed 26 of 36 passes for 418 yards as Alabama defeated Ole Miss, 59-31, on Saturday. The six touchdowns through the air and seven total touchdowns established new Crimson Tide records. He also broke the Alabama career record for touchdowns responsible for during the contest.

Prior to this season, no player at Alabama had ever thrown for 400-plus yards and at least five touchdowns in a game. Tagovailoa accomplished that feat twice in September. He finished the Ole Miss game with a passer rating of 224.8.

This is the third time in the past four weeks that the National Quarterback of the Week hails from the SEC, with Tagovailoa (Sept. 18, Oct. 1) and LSU’s Joe Burrow (Sept. 11).

The Davey O’Brien Foundation was created in 1977, and the National Quarterback Award, the oldest and most prestigious college quarterback award, was first issued in 1981. The Davey O’Brien Fan Vote, now in its 13th year, gives fans a chance to play a role in determining the award winner. Fans may vote daily for their favorite quarterback at VoteOBrien.org.