Compiled by a subset of the Davey O’Brien National Selection Committee, this year’s list was selected based on career player performance and expectations heading into the 2021 college football season. All nominees are required to have previously started at least one game at an NCAA Division I institution.

The Davey O’Brien National Quarterback Award is presented annually to the nation’s best college quarterback and is the oldest and most prestigious national quarterback award. Appearing on the preseason watch list is not a requirement for a player to win the award.

Sixteen semifinalists selected from the QB Class of 2021 list will be named on Monday, Nov. 8. The Foundation will announce the three finalists two weeks later (Monday, Nov. 22). The 2021 Davey O’Brien Award winner will be unveiled live on ESPN on Thursday, Dec. 9, during The Home Depot College Football Awards. Fan voting on social media will again play a role in the semifinalist, finalist and winner voting totals when combined with the national selection committee’s ballots.

The Davey O’Brien National Quarterback Award is presented annually to the nation’s best college quarterback and is the oldest and most prestigious national quarterback award. The Davey O’Brien Award honors candidates who exemplify Davey O’Brien’s enduring character while exhibiting teamwork, sportsmanship and leadership in both academics and athletics. Headquartered in Fort Worth, Texas, the Davey O’Brien Foundation has awarded more than $1.2 million in scholarships and university grants to help high school and college athletes transform leadership on the field into leadership in life. For more information, visit www.DaveyOBrien.org.

The Davey O’Brien National Quarterback Award is a member of the National College Football Awards Association (NCFAA), which encompasses college football’s most prestigious awards. Founded in 1997, the NCFAA and its 25 awards now boast over 800 recipients, dating to 1935. Visit ncfaa.org to learn more about the association. 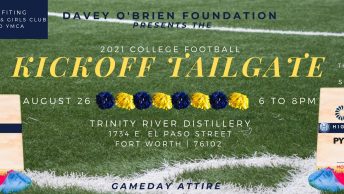