Four of the 20 quarterbacks­–Corral, Howell, McCall and Ridder–are semifinalists for the second straight year. None of the quarterbacks has previously been named a finalist.

“Due to the closeness in our voting, the Foundation decided to expand to 20 deserving semifinalists this year,” Davey O’Brien Foundation executive director Kendall Cason Iles said. “The 2021 season has been fascinating, and our Fan Vote reflected that excitement as a record number of voters showed support for their favorite quarterback during our first round.”

The list is comprised of nine seniors, five juniors, four sophomores and two freshmen, and consists of players from nine FBS conferences as well as one football independent. The Southeastern Conference has the most honorees with five, followed by the Atlantic Coast Conference (four).

The next step in the process will be to select the award’s three finalists based on voting from the Davey O’Brien National Selection Committee as well as the second round of the Davey O’Brien Fan Vote, which will take place on the award’s three social media accounts—Instagram, Twitter and Facebook. The top five vote getters on each platform will receive bonus committee member ballots which will be added to the votes cast by the National Selection Committee.

The three finalists will be tabbed on Tuesday, Nov. 23. The winner will be announced live on Thursday, Dec. 9 on The Home Depot College Football Awards on ESPN. 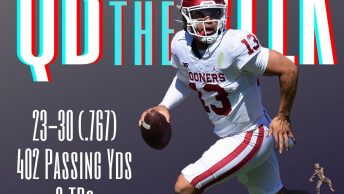