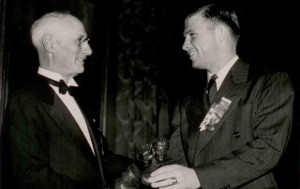 Davey O’Brien’s longtime friend and business partner, Charles Ringler, believed that the accomplishments and commitment of one of Fort Worth’s finest sports heroes deserved to be honored and remembered. In November 1977, just before O’Brien passed away from cancer, Ringler and other members of The Fort Worth Club established the Davey O’Brien Foundation and the Davey O’Brien Memorial Trophy.

The purpose of the Davey O’Brien Foundation is to recognize outstanding student-athletes for their achievements both on and off the field through the Foundation’s various awards programs. Since 1977, the Foundation has given away more than $1 million in scholarships and university grants to help high school and college athletes transform leadership on the field into leadership in life.

Originally, the Davey O’Brien Memorial Trophy was presented annually to the most outstanding player in the Southwestern states of Arkansas, Louisiana, New Mexico, Oklahoma and Texas. Four years later, the award was expanded nationally in scope and limited to quarterback, the primary position of our namesake. The Davey O’Brien National Quarterback Award is the nation’s oldest and most prestigious national quarterback award.

The Davey O’Brien Award honors candidates who exemplify Davey O’Brien’s enduring character while exhibiting teamwork, sportsmanship and leadership in both academics and athletics.

The Davey O’Brien Foundation is a Section 501(c)(3) non-profit organization located in downtown Fort Worth.