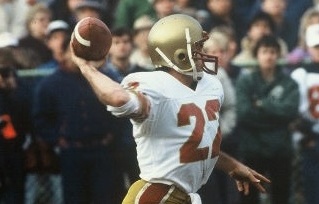 Doug Flutie earned the 1984 Davey O’Brien Award, Heisman Trophy and Maxwell Award after a spectacular senior season at Boston College. His year was highlighted by the famous “Hail Mary” pass to teammate Gerard Phelan as time expired to upset the Miami Hurricanes, 47-45. For the season, he threw for 3,634 yards and 30 touchdowns.

Flutie was named to the College Football Hall of Fame and Canada’s Sports Hall of Fame in 2007. His No. 22 has been retired by the Boston College football program.