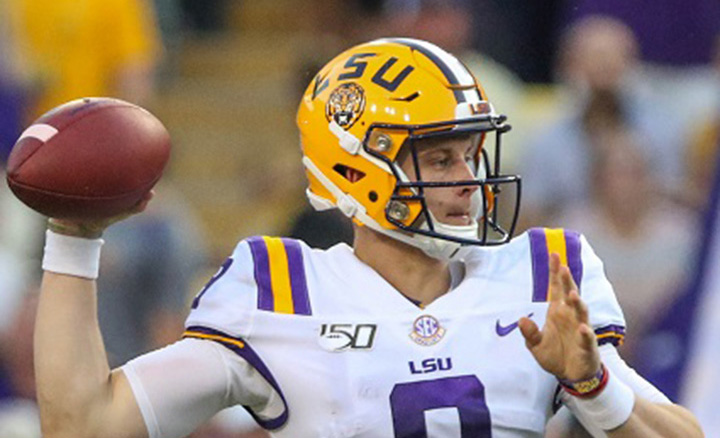 With arguably the most prolific season by a college quarterback ever, Joe Burrow guided LSU to the national championship and a perfect 15-0 record. On the year, the senior completed 402 of 527 passes for 5,671 yards and 60 touchdowns. He also rushed for 368 yards and five scores. Burrow set all-time NCAA records for single-season touchdown passes (60) and touchdowns responsible for (65). In addition, his completion percentage of .763 is the second-best season mark all time.

The product of Athens, Ohio, topped the nation in passing yards, passing touchdowns, completion percentage, passing efficiency (202.0), total quarterback rating (94.9) and points responsible for (392). Additionally, he ranked second in the NCAA in total offense per game (402.6) and threw just six interceptions (one per every 87.8 pass attempts).

Burrow passed for at least 300 yards 13 times in 15 games this year, including each of the last seven outings, and threw for more than 450 yards four times. He also accounted for three or more touchdowns in all but one game this year.

In the College Football Playoff National Championship Game against Clemson, he was 31 of 49 for 463 yards and five touchdowns and also rushed 14 times for 58 yards and a score. The game’s Offensive MVP, he set records for most passing yards and most touchdowns responsible for in a BCS/CFP championship game.

In the CFP semifinals, he was 29-for-39 for 493 yards and seven touchdowns, and added 21 rushing yards and a touchdown. Over the two playoff games, he completed 60 of 88 passes for 956 yards and 12 scores. Burrow contributed 14 total touchdowns as LSU scored 105 points.